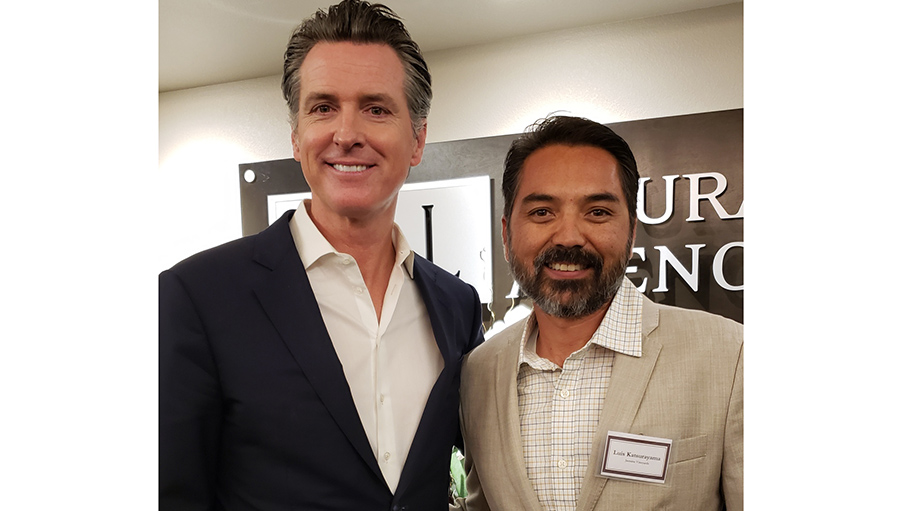 In early November, Luis Katsurayama had the rare opportunity of meeting with California Governor, Gavin Newsom.

“I think it went really well and he was very receptive of our concerns,” Katsurayama remarked of the meeting attended by select industry representatives.

Discussion included agriculture labor policies affecting farmworkers, and efforts to shape a better future for both California farms and farmworkers.

Both contractors and growers (like Jasmine Vineyards) expressed concerns to the governor about current policies. Newsom agreed there was room for improvement, and suggested that a small group collaborate on the top five issues that need addressing at the capitol. Newsom indicated he would encourage legislators to join in the discussion to find solutions.

On February 26, 2020, a group of farmworkers will meet in Sacramento to meet with legislators face to face. Governor Newsom indicated he will make an appearance.

Further support from Univision, including PSAs for educational campaigns, was offered toward improved policies.

Overall, the meeting with Governor Newsom was highly productive. “We’re all hoping a lot of good change can come from this,” said Katsurayama.

Luis Katsurayama is also a Board Member of the California Farmworker Foundation. As seen in the CFF Board Member Spotlight: Luis was born and raised in Yuma, Arizona, but spent most of his time working in farms in the State of Sonora, Mexico. Luis’ time in Sonora was spent in family farms where his family would grow and sell squash to Japan. After graduating from High School, Luis went to college in Yuma, and then began working for a hispanic media company as a Marketing Manager. In 2000, Luis went back to his roots and began his own business as an independent distributor and broker of leafy greens. In 2014, Luis joined Jasmine Vineyards, where he oversees the farming and food safety operations for the company. Luis currently lives in Temecula with his wife Gina, his daughter Isabella, and his dog, Nico, the Labrador.